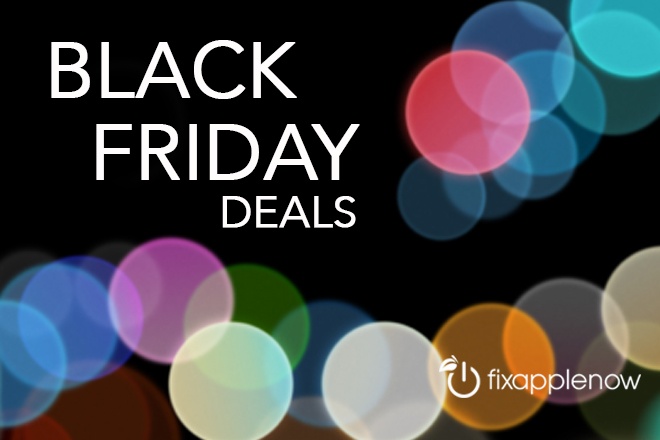 In general, Apple does not have sales. Black Friday, November 25, is the one time of the year Apple retail has a sale.

Apple’s Black Friday sales have included free credit on iTunes, the App Store or an Apple Store Gift Card, as well as full rebates on iPod Touches and other items. There are usually one or two models of Macs marked down $50 – $150, along with discounts on iPad models.

Retail stores that are authorized to sell Apple products are limited by Apple in the amount they can offer, but there are some outlets that sweeten Apple Black Friday deals by offering bundles that include enticing gift cards, rebates and other items.

Apple is offering a $150 Gift Card with the purchase of most Mac Models.

iPhone 7 Plus – Incentives if you sign qualifying installment billing agreement from either AT&T, Sprint or Verizon

iPhone 7 –  Incentives if you sign qualifying installment billing agreement from either AT&T, Sprint or Verizon

While some of these deals are available exclusively in-store, The National Retail Federation anticipates that over half of this year’s holiday shopping will be done online. Take advantage of pre-Black Friday online sales. Amazon has a week of Black Friday deals, updating offers as often as every five minutes all week.

If you have questions about buying a new Apple device or If you are in need of a data transfer or set-up for your new iPhone, iPad, Mac, Apple Watch, Apple TV or iPod, contact Fix Apple Now. We can set up an Apple network in your home that syncs and backups all your devices wirelessly. Gift the gift of Apple Tech and Training for the holidays. Ask about Fix Apple Now’s Apple Black Friday specials on iPhone cases, repairs, refurbished Apple products. Macs purchased from Fix Apple Now come with a 6-month warranty.

Apple Black Friday – The Only Apple Sale of the Year was last modified: November 25th, 2016 by Miriam Cronkhite